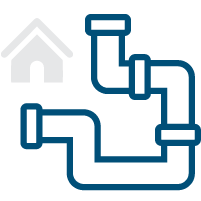 Sewer pipes are neat inventions. They transport a home or building’s wastewater to the sewer main. The pipes are buried underground and they commonly run through your home’s front yard. Depending on how old your house is or if the pipes have been upgraded or replaced, these pipes may be made of clay, cast-iron, plastic, PVC, ABS and fibre conduit.

There aren’t many causes of sewer blockages; however, blocked sewers are not uncommon. One of the most common reasons for blocked sewer is FOG, which stands for fat, oil and grease. When FOG gets is way through the drain and sewer lines, they tend to stick to the pipelines. After sticking, they solidify due to the cooling effect of running wastewater. They start to amass and eventually forming a blockade. Aside from FOG, other causes of blockage include deteriorated pipes and tree roots.

When you have a blocked sewer, it is crucial to a specialist in unblocking sewer blockage, rather than doing it on your own. While there are numerous do it yourself articles about unblocking blocked sewers, you can’t be sure that they will work. Also, if you don’t have the proper training, you may end up damaging the sewer pipes.

We are often called out to help with clearing blocked sewer pipes that can be caused by tree roots in sewer pipes. Clearing tree roots can also help with unblocking stormwater pipes. This can be completely hidden from above ground and we often use cameras to inpect the cause of the sewage blockage.

Using a drain camera allows us to pinpoint the exact location of your blocked sewer drain. This technology enables us to quickly and accurately diagnose your drain problem.

If there are tree roots in a residential sewer, the tool of choice is most likely a cable machine with a root cutting blade and attachment. The cable and blade is placed in the cleanout and the cable is sent down the pipe to cut out the roots. A sewer jetter can be used in conjunction with a hydraulic root cutter to cut away hard obstructions such as tree roots.

A sewer jetter uses the force of pressurized water to pull itself through pipes, scrub the sides of dirty drains, break apart sewer clogs and flush out residue. A jet nozzle provides the pulling and cleaning force. A sewer jetter is not recommended where your pipes have structural damage or are weakened by tree roots, foundation damage, or other causes.

Who to call for blocked sewer pipes?

Blocked Drain Plumbers have been providing a variety of plumbing services including blocked sink, blocked toilet and blocked drains in Melbourne for more than 15 years. We also provide drain cleaning in Melbourne. If you have a blocked sewer or any plumbing emergency, contact us now on 0412 738 874! Free quotes.